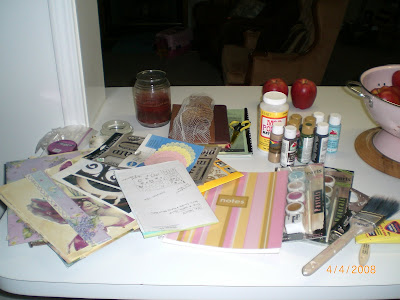 As I have likely stated previously in our brief time together my creative passions tend to run to the extreme. When inspiration strikes for a project it is as though I move into a parallel universe where everything except this ongoing creation is secondary. Well, inspiration recently struck, and I have been a busy girl, (hence the lack of posts!).

Approximately twelve years ago I commissioned my brother-in-law to build a small chest for me. At the time I had found the American Girl Dolls and wanted my daughter to have one for Christmas of that year. Being slightly frugal, I bought a number of things from the company but chose to make quite a few myself. Not being much of a handyman, but absolutely determined that my daughter would have a perfect gift, my dear brother-in-law was requisitioned to build a chest the equivalent of what AG had to offer. Needless to say, at a fraction of the cost!

I chose the Samantha doll. Those familiar will know that this doll's story takes place in Victorian times. So, once the chest was completed I began the process of painting and decoupaging the interior with colors and papers typical of the era. The exterior was left simply stained wood with some wood burning to give it character and personalization. The interior wound up being a purplish color and a deep green. The characters decoupaged inside were girls and women dressed in period clothing as well as the obligatory female cherubs and angels, all quite overdressed.

Here let's make a "Matrix-like" jump to present day. My daughter is grown with a new little one of her own. She is not now, (nor was she then), a 'doll person' nor is she sentimental, (as far as "things" are concerned), in the least. Samantha and all her belongings has gone the Ebay Way and the trunk is still abiding with me. Being who I am I saw this little box as raw material and perfectly alterable. This trunk has set beside my bed for about a year now collecting all manner of dust and the inevitable cobweb or two just waiting for inspiration to strike...it has!
On a recent evening at home in the woods it came to me that I should either 1) get rid of the chest or 2) find some use for it. You guessed it! I decided my journals should have a special place to be stored since they are something I want to pass to my daughter and granddaughter when my soul flees this world. So the process began. I am now in create mode and shall remain so, I am afraid, until this little trunk is a reflection of me and who I am. Sound like a daunting task? Not really. This is more like a life-long obssession, this allowing (or is it demanding?) people to view a part of my soul through the things I create. Either way this box is gonna be Killer! (I think that term probably dates me but so be it.)
I began by pulling out images and searching for a color palette that would thrill me. This process winds up making a mess of your work space but it is the only way that works for me. I have to get things out of the boxes and off the shelves and shuffle them around to see what comes to me.
While in super-housecleaning mode my daughter recently returned to my possession another gift purchased for her - though this one was much more recent - a copy of Brian Froud's 'Pressed Fairy Book'. I bought this for her during a period when we were both exploring fantasy. The watercolor illustrations were an instant favorite for me! And that brings us back to the box...
The first thing necessary for me to see what this trunk could become was to do away with what it had been. I began by disassembling the box and removing all the hardware. This left me with three pieces, the body of the box, the lid and the tray that sits inside. I then used spackling paste to get rid of all the woodburning marks on the exterior. Once dried I began sanding the box inside and out to prepare the surface for painting. This was quite a task! Those little orange and yellow labeled jars of Mod Podge may look unassuming but let me assure you - once there it will stay, whether you want it to or not! I sanded my wrists sore before finally willing to pronounce my box ready for priming.
Posted by Mike at 6:17 AM

Mike
Hello World, Christian, wife & mother & new Grammy - that's just a few of my titles. I love & am devoted to God, my husband, child & grandchildren completely. My extended family is also a large part of who I am, (including our pets), I love them, too. On another level I am a bibliophile, budding writer, truth-seeker, gardener, art journaler & paper manipulator. In a perfect world, (with a constant temperature of approximately 80 degrees), I would be able to pursue my interests out of doors in the sunshine all the time! Without fear of contradiction I refer to myself as a country girl. City life does not suit me at all. I need space, sun, green & growing things, animals, freedom, flowers, etc. (You get the idea?). Simplicity is important in my day-to-day affairs. I do not function optimally under the constraints of society today. (It depresses me to think we have been reduced to beings who feel the need judge our fellow humans by the clothes they wear or the vehicle they drive. How distressingly sad.) My soul needs to give & receive love, love, love. Here, for your perusal, is a peek into my heart.